YOU SHOULDN’T LET KIDS DRIVE TO THE TRAILHEAD.

This is a call to action to protect our wildernesses. But don’t worry, it’s doing something fun. Like backpacking.

We have a problem in our National Parks. Kids aren’t visiting them. Rather, it’s a problem with their parents, since as we all know, kids shouldn’t drive.

But you can help. Let’s start at the beginning.

All of us have “that” story about our first backpacking trip. Mine was when two Fresno State recreation majors said we should go backpacking. Even though I was a New York boy with no exposure to backpacking, it struck me as a very good idea. The overnight trip ended up being a hot, dusty, four mile walk along an ugly, litter strewn dirt road up a river canyon and I think I took two extra pairs of jeans and enough food for three days — maybe four. Many of you took that same first trip, so you know what I’m talking about.

Later that Summer, Brian Pierce, Director of the Thousand Oaks Recreation Center and stellar human, took me under his wing and transported me off to Miter Basin for my first “real” backpacking trip to the Sierra Nevada. It started a love affair with those mountains that continues unabashedly to this day. It’s hard to understate the value of people like him showing people like us the ropes for the first time. Thank you Brian Pierce, wherever you are.

Fast forward 38 years and I’m sitting in a booth at the 50th Anniversary of the Wilderness Act Event in Red Bluff, California, trying to explain the importance of wilderness to a 14 year old.

How to explain it? Wilderness is important because we need it for watershed protection. We need it as a preserve for native flora and fauna. We need it for that connection we humans innately have with our natural landscape. We need for it to look the same 100 years from now for our grandchildren as it does today, yadda, yadda, yadda, blah, blah, blah. Those are all the things adults tell kids. But how do we connect this generation with wilderness so when it becomes time, they can defend or care about it, not to mention the sheer joy we all know it provides us?

Think about it. When was the last time a kid went an entire day without seeing a road, building, bridge, car, sidewalk or power lines? Many kids have never experienced one of these days. If we don’t get kids involved now there will come a time when wilderness will be threatened and today’s kids will say “It makes no difference to me one way or another, I’ve never been there.”

I have been considering this problem for the past several years. I’m not much good at being a volunteer because I soon start looking at my watch wanting my shift to end. I’ve been looking for some sort of educational project I could call my own. Something I am passionate about. Then, three years ago I was backpacking with a couple of friends in my “home park” — Lassen Volcanic National Park — and we ran into a group of high school students and adults calling themselves the Petaluma Wilderness Team. They take kids backpacking as part of an educational and mentoring project. My friends and I looked at each other and knew right then and there we needed a Wilderness Team for our county.
We came back, hunted down a small grant ($3,000) and bought enough backpacks, tents, sleeping bags, pads, water filters, stoves and cooksets for six kids. It was barely enough money, but sleuthing out the killer deals over several months was part of the fun. It was too late to partner up with a non-profit for that year (for reasons I’ll explain in a minute) so we took kids we knew for a shakedown cruise to the Lassen Park backcountry. Contrary to their dire predictions, not a single kid died from being disconnected from the internet for three days. None of them had ever done anything like it before and despite a little rain, they all had a great time.

Before the end of the year we had partnered up with the Tehama County Police Activities League (PAL.) Our trip added another event to PAL’s activity calendar, which helps keep kids out of trouble by giving them something fun to do and provide adult mentorship. Being part of PAL also allowed us to apply for annual, non-profit educational grants the Lassen Park Foundation gives out to pay for transportation, food and the promised burgers in Chester (just south of Lassen Park) after the backpack trip. Lastly, the PAL partnership gives us the ability to perform background checks on all the adult leaders and liability insurance. There are lots of other organizations out there to partner with, it was simply a matter of asking around until I discovered our project meshed with PAL’s mission.

We just finished up our third year and by anyone’s measure it has been a wild success. We’ve gone from one, all-boys trip to two trips; one co-ed and the other an all-girls trip led by an Amanda Sweeney of the Lassen Park staff. She said of her trip “It couldn’t have turned out better if it was a movie!”

The two women who helped me this year with the co-ed trip were first time backpackers themselves and they are currently forming their own Wilderness Team in an adjacent county. While sitting in that booth at the Wilderness Event, I received a lot of interest from adults in yet another county and I strongly suspect a Team will form there soon. All of this from one grown-up that simply wanted to pass on what he knew about the wonders of backpacking.

We need more kids like Danielle Tidd. Last Summer I met the Tidd family, Bill, Melanie, Michael and Danielle on the John Muir Trail. Recently graduated from high school, Danielle wanted to hike the JMT as her graduation present!

You need to help create the next batch of Danielle Tidds. Take what you know and pass it on. Teach them how to live comfortably, happily and safely in the wilderness. Take them to see the expanse of Cascade Valley, Muir Pass and the top of Whitney. Let them soak up the unbelievable vistas of Cathedral Peak, Thousand Island Lake, Evolution Valley, Rae Lakes or in my case, Miter Basin.

Told you it would be something fun. Now start planning a trip.

Visit my website at www.apexweb.com to learn more about the Wilderness Team. You can contact me through the site and I’ll happily talk with you about forming a Wilderness Team of your own. 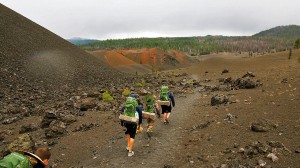 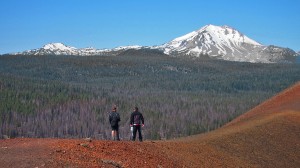