A few nights ago it was movie night at the Serena house. Izzy has been prone to requesting documentaries as of late, so we headed to itunes on Apple TV for a search. Low and behold, MILE… MILE AND A HALF was featured in the top ten docs that day. We joked with her, asking if she wanted to watch #9 on the list. Her response? “NOOOOO. I’ve seen that movie too many times.”

Who can blame her? It was enough to be away from us for the month we were on the trail, but we didn’t anticipate the countless hours that would be spent once we decided to pursue making a feature film out of the footage we gathered from the trail. The film was essentially a sibling during her last year of pre-school and first year of Kindergarten. Between the meetings, traveling for screenings, or just discussions between Jen and me around the house, Izzy was impacted by the film.

See the video from our trip to Muir Trail Ranch

However, one of the many advantages to this entire experience has been the relationships she’s formed with all the wonderful people people who’ve either worked on the film or whom we’ve met because of it. Kolby Kirk has hand painted tattoos on her hand. Kazu made her a traditional Japanese dinner during her visit with us. And then there’s Jason, Durand, PB, Bernie, etc. Each of whom have treated Isola not as the kid who’s always around, but as another member of the project. 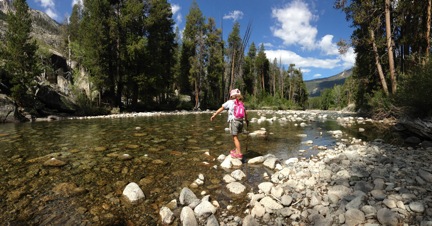 Last weekend, many of us had the opportunity to regroup for a weekend trip to the Muir Trail Ranch. It is a complete joy to watch your child embrace an experience with zest and appreciation. She loves this group like they’re her family, and she was an incredible addition to the trip. Many times I teared up watching her join Jen in the chilly river water, walk alongside Durand in the large meadow, chatting on a rock with Kit or sitting next to PB & Bernie at the fire, her gaze affixed on their musical instruments in action.

This backpacking documentary film has had a huge impact on our family, and we’re grateful for it.